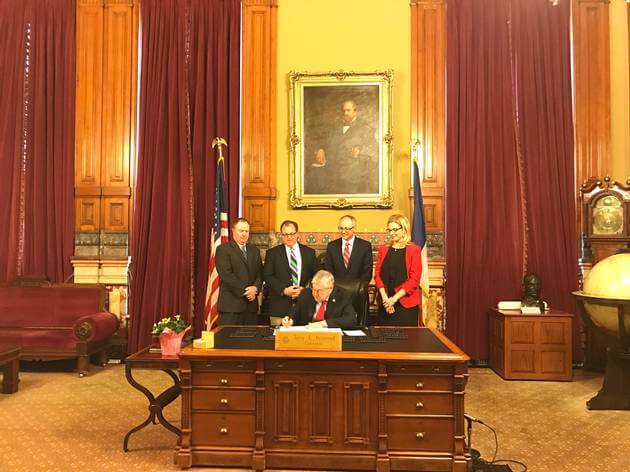 On April 20, 2017, Governor Branstad signed the Iowa Fiduciary Access to Digital Assets Act, which amends Iowa Code chapter 633 and adds a new Iowa Code chapter 638. The Iowa Act is based on the Revised Uniform Fiduciary Access to Digital Assets Act. Pictured with Governor Branstad are, from left, Doug Struyk, legislative counsel for the Iowa State Bar Association, Tim Coonan, legislative counsel for the Iowa Academy of Trust and Estate Counsel, Joshua Weidemann, an attorney with O’Connor & Thomas, P.C. in Dubuque, and Rep. Ashley Hinson, who sponsored the Bill in the Iowa House. Joshua Weidemann was a member of the Uniform Law Commission’s drafting committee for the Uniform Act and was the principal drafter of the Iowa Act. The Iowa Act was approved unanimously by both legislative chambers during their 2017 session.