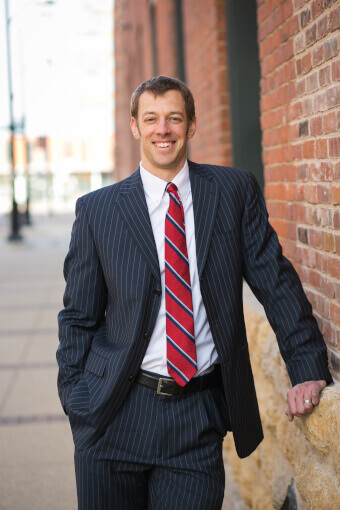 Christopher C. Fry was born and raised in Cedar Rapids, Iowa. He graduated from Luther College in 2001 with a Bachelor of Arts degree in Communications and was also a 4-year member of the track and field team. He obtained his Juris Doctorate from the University of Iowa in 2004. He joined the firm in 2004, upon admission to the Iowa Bar. Chris is a member of the American, Iowa, Wisconsin, and Dubuque County Bar Associations. He was admitted to practice in Wisconsin in 2012. He is also admitted to practice before the U.S. District Court and Bankruptcy Court for the Northern District of Iowa, and U.S. District Court for the Central District of Illinois. Chris is also a member of the Iowa Academy of Trial Lawyers. Chris has a general practice which includes, but is not limited to the areas of business law, criminal law, insurance, personal injury, workers’ compensation, labor and employment, litigation, trial law, and appellate practice.

Christopher C. Fry was again selected by his peers for inclusion in The Best Lawyers in America© 2017 in the fields of:
* Litigation – Insurance
* Personal Injury Litigation-Defendants
* Workers’ Compensation Law – Employers

Christopher C. Fry was recently selected by his peers for inclusion in The Best Lawyers in America© 2016 in the fields of:
* Litigation – Insurance
* Workers’ Compensation Law – Employers

American Society of Legal Advocates
Christopher C. Fry was selected as one of the Top 40 Under 40 Litigation lawyers in the State of Iowa for 2015.

American Society of Legal Advocates:
Selected as Top 40 Under 40 Litigation lawyers in the State of Iowa for 2014

Dubuque Golf & Country Club, Board of Trustees – 2018 to present