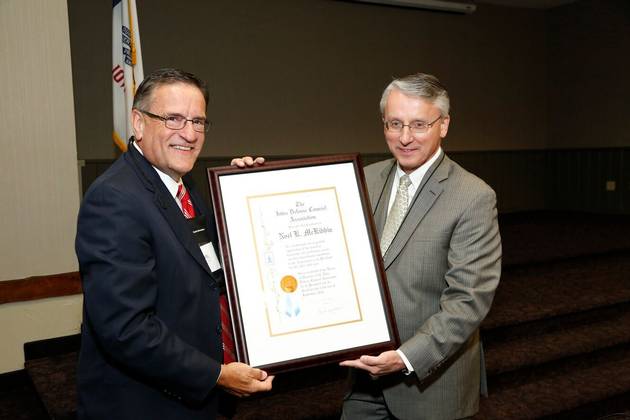 Johnston, Iowa: At the Annual Business Meeting of the Iowa Defense Counsel Association (IDCA), the membership elected Richard Whitty, attorney at O’Connor & Thomas, P.C., in Dubuque, as President of the association beginning September 22, 2016. Whitty will serve a one-year term. Additionally, Whitty received the Edward Seitzinger Award, the highest honor bestowed upon a member of IDCA. This award is presented to the IDCA member who contributes most to the organization during the year. Founded in 1964, with current membership of 360, IDCA members are lawyers and claims professionals actively engaged in the practice of law or in work relating to the handling of claims and the defense of legal actions. IDCA’s mission is to be the trusted professional voice for the defense of civil litigants through advocacy, education and member engagement. “Richard is a wonderful asset to the IDCA,” said Noel McKibbin, IDCA Immediate Past President. “He has represented IDCA on the national level at Defense Research Institute (DRI) and is always prepared to offer new ideas and processes to move our organization forward. He is a well-rounded leader with a clear vision for the future of the profession.” Whitty has served on the IDCA Board of Director since 2011. Whitty add other service or bar organizations here. The Iowa Defense Counsel Association is headquartered in the offices of Association Management, Ltd. (AML), a Central Iowa-based association management company providing full-service management to non-profit trade associations and professional society associations since 1976.